Did I happen to mention that it was raining buckets on Maggie and Rob’s day?  But as I told Maggie, it’s good luck in our family.  It rained the day I was born, and the day she and KK were born.  It rained on KK’s, Maggie’s and Tess’ high school graduations, and NOW, her wedding day. 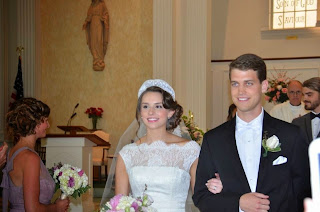 I finally gave up looking for the passport, and as I told you yesterday, I had a pretty good idea where it was.  A month ago, I took it out from lock and key, and asked Maggie if she’d like me to keep it or hand it over now…she decided to take it…

I’m not going to sugar coat it — I looked awful.  Makeup slapped on in four minutes flat, dress thrown on — and to make matters worse, I had called Rob to tell him we were running late for the photographer.  He asked, “Is everything alright?”  I could hear the worry in his voice.  “No one’s sick,” I replied.  I called back a second time, and told him about the passport.  He knew something was up, and I thought I might as well be the one to tell him.  I’ve know him since he was 11, after all.  Better he knew the truth than for his mind to race to dark places and think Miss Maggie was having second thoughts…as if!!!  🙂

If I ever wondered if Rob and Maggie would ‘make it’, (in the treacherous waters of matrimony), and I never did by the way, Rob’s calm response to my confession, “Let’s enjoy today, we’ll work it out,” squelched even the tiniest twinge.  And the look on his face when he met his bride at the alter  – well, take a look for yourself.. 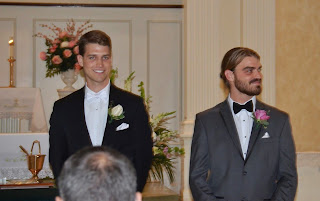 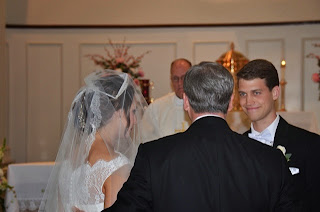 Love the picture below, taken before Robert’s Senior Ball in high school.

Tomorrow — where was the passport, did they make their flight, and what part did the father of the groom, Bob Stauble, play in all the drama? 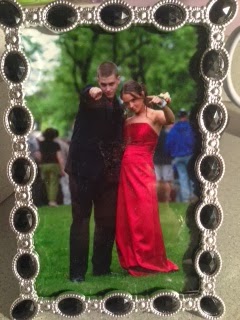